This is really one of the loveliest cozy series around.  Fiffer’s prose sparkles, and she knows how to tell a story.  All her characters are wonderfully real people, very much like people you might actually know yourself.  Fiffer’s main character, Jane Wheel, is uncharacteristically zen in this outing, which I found refreshing. 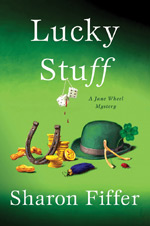 Jane is antiques picker and a fledgling private eye, and it’s her love of “stuff” that has propelled the series.  Much like Fiffer herself who collects Bakelite, buttons, pottery and vintage potholders among other items, Wheel’s home and garage are packed to the rafters with her stuff.

Except.  In the last outing, Backstage Stuff, Jane was reeling from her separation from her husband of many years, Charley.  In this book she’s moved on to selling her house and sending her only child, Nick, off to boarding school.  As the story opens the always gently humorous Fiffer is recounting Jane’s struggles with winnowing her stuff down before she puts it into storage.  She’s only managed to part with a potholder, which she thinks better of and packs anyway.

Moving guys rounded up by her pal and partner Tim Lowry pick up her stuff.  Her now almost empty house feels sleeker, not her own.  As Jane heads out to her hometown of Kankakee, Illinois and a stint of working with Tim and hanging out with her parents for a bit while she rethinks her life, she feels almost free and strangely content.

A couple of plot turns ensure that Jane is now juggling several part time jobs, one of them helping out behind the bar of her parents’ place, the EZ Way Inn.  In almost every book I hope that Jane will spend quality time with her parents Don and Nellie, who are two of the strongest characters in the series.  Nellie spoils not Jane, but Jane’s dog, Rita.  She’s not sure Jane can handle being behind the bar, but a crisis puts Jane there anyway.

Jane also agrees to act as an assistant to a B-list celebrity, Lucky Miller, a Vegas comedian who has taken over his former hometown to film a celebrity roast of – himself.  He hires Jane to keep an eye on some mischief that’s going on around his office and to take the place of his temporarily absent assistant.

The whole town of Kankakee is functioning like Lucky’s reality show, and Jane is drawn into the real reason for Lucky’s return to town.  While there’s a dead body the true mystery lies in the past, but what Fiffer really seems concerned with here is memory and attachment, whatever forms those things may take, be it a button or a person.

At the end it feels as though Jane has found a new spiritual plane to operate from, if that’s not too much meaning to assign to a cozy mystery.  In my opinion, it is not, and the last scene in the book had me in tears.   What a lovely book this is.