This novel, the eighth in Penny’s award winning and beloved Armand Gamache series, is yet another variation on the golden age form she uses as a template.  This one is basically a classic locked room mystery, though it’s so much more, as are all of Penny’s novels.  Set not in Three Pines but in the obscure and remote monastery of Saint-Gilbert-Entre-des-Loups (literally “Among the Wolves”), the victim is a monk, and the only two officers on site are Gamache and Beauvoir. 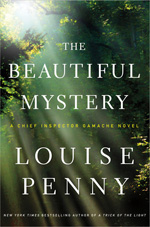 This is a beautifully constructed book, the form following the theme.  The monks of this obscure monastery are world renowned for their beautiful rendering of Gregorian chants, thanks to a recent CD that achieved wide distribution and acclaim.  Gregorian chants are sung to a very set and specific set of rules, and are simple and repetitive, the singing and listening both a form of mediation and prayer.

The monks at Entre-des-Loups are all gifted musically, and, Gamache suspects, have been recruited for their musical ability as much as for their devotion to God.  The murdered monk is the choirmaster, found bludgeoned in the Abbot’s private garden, to which only the Abbot and his secretary have the key.  An apparently simple and straightforward crime, much like the apparently simple and straightforward chants that are the monks’ specialty.

As Gamache and Beauvoir acclimate to the community, joining the monks at prayer, meals, and daily tasks (while gently questioning each of them), they are confused by some aspects of this apparently simple case.   Why is there a split between the monks?  Why was the dead man clutching a puzzling piece of hand transcribed music?  Who is loyal to the abbot, and who to the choirmaster?

Gamache and Beauvoir are confronting their own demons, laid out so powerfully in Bury Your Dead.  Gamache has recovered from the terrible crisis that injured both him and Beauvoir and killed several other officers, but Beauvoir still seems shaky.  When Gamache’s boss turns up unexpectedly, the animosity between Gamache and his boss is apparent while all the reasons behind it are not.

Penny has taken a simple form – the locked room mystery – and applied a simple form to it, the monastery with the chanting monks, the few police officers, the pared down cast of characters.  But there is richness in the simplicity.  As one of the characters says to another:  “It uses all the rules, but then adjusts them slightly, as though the old chant was the foundation, and this…a whole new structure.”

That, in a nutshell, is to me, Louise Penny’s gift.  She utilizes a classic mystery format, but she finds so much that is new within it.  As each book varies so much from one another – in tone, in emotion – it seems that her journey of exploration will be a long one.  This variation is a thoughtful meditation on music, spirituality and as always, the emotional ties that both bind and divide.  It’s another lovely book from a writer whose work is a gift to readers.