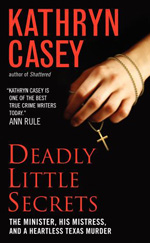 Now that we’re in the middle of another political campaign, perhaps it’s time to examine the proposition that ostentatious religious piety is somehow indicative of inner virtue. To all those who boast of how devoted a church (or temple) goer their candidate is, how full of praise and prayer, how supportive of the precepts of their faith, I present Matt Baker, popular hardworking pastor, devoted family man and product of good Christian parents, the very embodiment of those old time Texas Baptist values – and also, oh yeah, a thoroughly depraved murderer.

Matt’s the central figure in Kathryn Casey’s great new true crime book Deadly Little Secrets. There’s no better writer in the genre than Casey and in this effort she’s got an extra juicy case to work with. Pastor Baker’s wife Kari apparently committed suicide via pill overdose one night, with Matt the only witness to the hours surrounding her death, his account of her mental state differing sharply from that of just about everybody else that knew her. But there was a (typed, unsigned) suicide note and Matt was a man of God and Kari his wife, so the local Justice of the Peace, seemingly reluctant to abandon his warm bed in the middle of the night, signed off on a verdict of suicide and ordered no autopsy.

Of course, due to Casey’s masterful scene setting, the reader has strong suspicions to the contrary. Kari herself had recorded her fears of Matt in the margins of her bible and asked her therapist if it was crazy to think that her husband could possibly be trying to kill her. These facts and certain troubling things about Matt’s past are quickly uncovered by Kari’s devoted family and friends as they begin a grueling crusade for the truth, opposed not only by the dissembling pastor, but by a police force more intent on defending their disastrous snap decision than seeing justice done. Another degree of difficulty is added by the fact that the assumption of suicide prevented any conclusive forensic evidence from being recovered at the scene of the crime.

Casey uses the traditional tools of the writer — character, setting, pacing and foreshadowing — to spellbind. It’s true that the juicy raw ingredients were already out there, but a gifted true crime practitioner like Casey digs deep to find the facts, combines them precisely and brings everything to an energetic boil. By the end of the book there are as many memorable characters, unexpected developments and courtroom bombshells as in any Perry Mason yarn, but no one can fault its plausibility because it’s true.

And the glare of truth in a good true crime book like this one often extends farther than a single crime to cast a cold light on the society in which the crime germinated. Matt’s serial exploitation of women, often reported, but never seriously confronted or even officially recorded was surely made easier by an avowedly patriarchal culture, one where a banner reading A Woman Who Fears The Lord Deserves To Be Praised hangs proudly next to the altar. In the end, the message of Deadly Little Secrets isn’t that different from that of a lot of other cautionary tales — things are not always as they seem. (Jamie)