Julia Kramer’s skill set is extremely varied:  she’s funny, she writes suspenseful books, she tells you a bit about the way TV news works, and her books are an enjoyable breeze to read.  Why that is is a mystery, as she tends to actually cover some very dark territory in her novels, and they’ve gotten a tad darker lately. 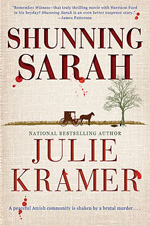 She’s also, since her first novel, sharpened her skills as a straight up mystery writer.  She’s gotten terrific at twists and clues, and at setting up a story that gives the reader a fair chance at figuring things out.  In this novel, set partially in Minnesota’s Amish community, she takes two disparate worlds, the “English” and the Amish, and sort of pits them reluctantly against each other. The book opens with a terrific scene of a farm boy falling into a sinkhole and finding he’s there with a dead body.  While the farm boy isn’t the point, the dead body is the point, this wonderful scene setter grabs your attention and gets you completely invested in the story Kramer wants to tell.

Riley Spartz, Kramer’s main character, is an on air reporter in Minneapolis-St. Paul, and she’s trying to roll with the punches that are changing every aspect of journalism.  Her newest cross to bear is a news director who is concerned almost exclusively with cost and demographics.  When Riley pitches the sinkhole story to him (it’s actually in her parents’ home town) he’s reluctant but she points out they’ll have an exclusive – potentially like Baby Jessica – if they cover it.  When he looks blank at the “Baby Jessica” reference she knows she’s in trouble, but he gives his reluctant OK and she’s off.

When the rescued boy’s mom and the sheriff both seem strangely reluctant to talk about the happy outcome, Riley senses there’s something up and she finds out about the body the boy spent the night with by having her camera man film the workers at the sinkhole.

The title gives away the identity of the victim, though she’s tricky to identify, as she’s missing her face.  When it becomes clear that she’s Amish, Riley senses there’s lots more to the story and begs her boss to be able to cover it, but he’s against at as it’s outside of their demographic,  When a side bar story emerges concerning hunters killing black bears who have been tagged for research, her producer is willing to put her on that story (it’s about an animal, after all) and let her follow up the “Sarah” story as a sideline. Kramer always has a side bar story about animals – this one involving the black bear is excellent and gives you some new insight into hunting, hibernation, and just how fast it might take a hibernating bear to wake up.  And she ties the two threads together very skillfully by the end of the book.

The Sarah story is a heartbreaker.  Why is she being shunned by her community?  Her grieving little sister isn’t allowed to talk about her, and when Riley circulates a picture of her the family is furious as they don’t believe in images of themselves.  Riley has a hard time getting a foothold into the story until the sinkhole boy’s mother calls her for help.

I don’t want to give away too much of the clever story here, other than to say that as usual with a Julie Kramer novel I had a hard time putting it down.  I liked the Amish storyline and the fact the much of the book took place in Riley’s home town.  I thought the ending was fantastic, one of her best yet.  And I can’t wait to find out what happens in Riley’s newsroom next.