Here’s some advice: run, don’t walk, to the stack of Julia Keller’s first crime novel, A Killing in the Hills, and stash away a first edition for yourself.  I rarely make this prediction but I am predicting Keller’s career will be a long one.  This is a wonderful first novel, strongly reminiscent of some of Laura Lippman’s best work – her stand-alone crime novels that, like this book, are about so much more. 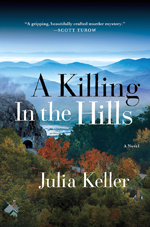 A Killing in the Hills is set in the tiny, and fictional, Acker’s Gap, West Virginia, but the assured writing and sense of place make clear that while technically Acker’s Gap is not a real place, the town Keller is describing and writing about most definitely is real.  The book kicks off with the kind of random and senseless shooting that we have become all too familiar with recently:  three old men are gunned down in the middle of a busy lunch time at a fast food restaurant in Acker’s Gap.

Sitting near the old men is Carla, the teenage daughter of Belfa Elkins, the county prosecutor.  When Bell (she doesn’t go by Belfa) hears the news, she’s at first unaware that Carla had been in the restaurant.  When she discovers that she was there, what follows is a dance perhaps familiar to the parent of any teenager:  the efforts of the teenager not to lose face, the efforts of the parent to keep the child safe, no matter what.

There’s more, though, because even as Bell hugs and comforts her daughter she also thinks:  “She was a mother, but she was also a prosecuting attorney, and on the stem of her softly winding maternal thoughts…They’d get the bastard who did this.  There’d be no mistakes in compiling the prosecution’s case.” This harsh give and take colors the mother-daughter relationship, as well as the story unfolding in the novel.  Bell’s quest to do her job as a mother and to do her job as a prosecuting attorney don’t always intersect, something which makes her daughter angry.

There is more than one thread in this complex look at the way the law works in this tiny town, but in the end all the threads seem to have the same theme:  what would you do to protect the person you love most in all the world?  The heartbreaking answers at the end of the novel had me in tears.

While Keller’s prose is more workmanlike that poetic, that part of the puzzle will probably come in time.  What she does possess in spades is a compelling way of telling a story and a wonderful hand with characterizations.  Not since Sharyn McCrumb’s early Ballad novels (I’m thinking specifically of The Hangman’s Beautiful Daughter and She Walks These Hills) have I read a book where this area of the country is so well written about, warts and all.  It’s a loving but clear eyed look at the dichotomy of West Virginia’s physical beauty, and its ugly poverty.

The subtext of course is drugs – the drugs that have ripped their way through our culture, disabling and crippling many, many people, and leaving a destructive and grief-filled wake in the form of the drug user’s family.  Bell is focused on eradicating this problem, even more so when the shooting at the restaurant seems to be tied to the drug business.  As Bell bulls her way through the case, sometimes leaving Carla in the breach to fend for herself, emotionally and otherwise, she’s also forced to confront some demons from her own past.

The backstory in this novel is a very rich one and while it never overwhelms the story, it sometimes makes the story telling tapestry so dense you have to step back for a moment and take a breather.  What makes the book truly memorable is the way Keller is able to wind things up, tying off some threads while leaving others open for discussion in future novels.  I hope those will be forthcoming.