Hank Phillippi Ryan’s smart, fun thriller set in the world of Boston news – a world she is very familiar with, as it’s one she’s worked in for decades – will have you flipping the pages faster and faster as you get to the twisty end.  Her central character, Jane Ryland, a former television reporter, has left her TV station in disgrace as she’s been on the losing end of a million dollar lawsuit, one where she’s refused to reveal a source. 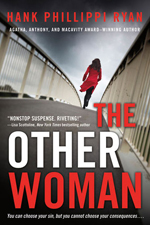 Jane is starting over as a print reporter at the fictional Boston Register. While she’s adjusting to the fact that she doesn’t have to look great all the time like an on air reporter does (a positive) she’s also adjusting to the fact that she’s often digging in her bag for her own camera as, unlike an on air reporter, she has no following camera-person (a negative).  Also she has to share a desk with the mysterious and elusive Tuck (another negative). Her first assignment is the seemingly simple and uncomplicated task of getting an interview with Owen Lassister’s wife, who seems to be MIA.  Lassiter is running for the senate.

While Jane tries unsuccessfully to get past the wife’s press secretary, she’s more than startled when the woman herself calls to ask to speak to her “off the record”.  Lassiter’s wife, Moira, is a trim, lovely, proper Bostonian type who lets Jane know that she’s sure there’s “another woman” and she’s not going to stand for it.  She’s asking Jane, with her reporter’s skills, to find out what’s going on. Jane’s desire to get involved in another high profile, “off the record” story is about nil, but she’s drawn into the story anyway as things accelerate in all kinds of ways.

This is a story with several threads, and like a Harlan Coben novel, they are all ultimately related, though, also like a Coben novel, you’re never sure quite how until the end of the book.  Ryan also shares Coben’s brisk storytelling style as she relates her complicated thriller with an assured voice that won’t leave the reader confused, but rather wanting to turn the pages.

Jane is attracted to, but not in a relationship with, a cop, who is on the case of the so-called “Bridge Killer” though he’s sure it’s nothing of the sort.  When one of the Bridge Killer’s victims turns out to be Jane’s unrevealed source, things really get complicated.  While in one way things look bad for Jane, you have a feeling it’s all going to work out.  In a way the thriller is the most optimistic of mystery formats, as the central character must (almost always) take a positive and proactive approach to get to the bottom of things.  As it happens, this suits Ryan’s storytelling style down to the ground.  I’m already looking forward to the next installment of Jane Ryland’s life story.