Sometimes when an author is writing an historical series, his or her rhythm gets so in tune with the time they are writing about, that the story they are telling takes on the tone of the actual time period.  D.E. Johnson’s third novel set in 1912 Detroit takes on a gothic feel and the whole tenor of the story is enriched by it.  The first two books were set inside the automobile industry, this one takes the scion of the electric car company, Will Anderson, and sets him inside the gigantic mental hospital known as Eloise. 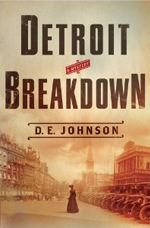 Eloise, on the outskirts of Detroit, was so huge it had its own police and fire stations, farm, bakery, and school.  At one point it housed 10,000 people.  When Will and his lady friend Elizabeth encounter Eloise, they have been called there in the middle of the night because Robert, Elizabeth’s brother, who has been an inmate there for many years, has been accused of murder.  They’ve been called not by a doctor but some mysterious “other,” and the doctors and staff are in fact annoyed when Will and Elizabeth show up, and reluctant to let them see or talk to Robert.

Will decides that the best way to help prove Robert is no murderer is to go undercover as a patient.  Elizabeth is hampered by the fact that her mother is losing memory rapidly and can’t be left alone.  When she is able to find some help with her mother, Elizabeth feels free to get herself into Eloise as a volunteer.  When Will disappears Elizabeth is pretty sure he’s succeeded in going undercover, but she’s not positive, and it’s with a great deal of trepidation that she begins her work at the hospital, worried about her brother and Will.

It’s at this point that the story assumes both its true voice and a real gothic tone – courtesy of Phantom of the Opera and a serial killer on the grounds who seems to be using the Phantom’s killing technique (the Punjab lasso).  As the victims add up and Will is sure he can’t escape or help Robert (who is stuck in solitary) the tension and suspense of the story also mounts.

Alternating voices between Elizabeth’s and Will’s, Johnson is able to tell all the parts of the story – what Will discovers on the inside, and Elizabeth on the outside – that helps the entire narrative hang together.  Johnson has become a very deft storyteller in the course of three books, and my affection as a reader for both Will and Elizabeth has grown as well.  I’m happy to say Johnson leaves a pretty large thread hanging to follow up in his fourth book, and I can’t wait to find out what happens next.