There are more pleasures to be found in true crime than simply you couldn’t make this stuff up. Because the events described actually happened, true crime has the authority to make us question our assumptions about human nature and society in a way we wouldn’t accept from fiction. Two very fine and very different examples of this are the new paperback arrivals Drawn to Injustice: The Wrongful Conviction of Timothy Masters by Timothy Masters with Steve Lehto and The Man in the Rockefeller Suit: The Astonishing Rise and Spectacular Fall of a Serial Imposter by Mark Seal. (They’re also examples of the genre’s predilection for long, explanatory subtitles!)

Timothy Masters’ role in the horrific crime that propels Drawn to Injustice would seem to be marginal and fleeting, but, as he himself narrates with the expert aid of writer Lehto, it is only the beginning of a Kafkaesque tale in which a secondary character, a red herring, is somehow propelled into the heart of a major nightmare. One morning in 1967 as tenth grader Tim walked across the vacant field next to his house on the way to catch the school bus he saw an inert female form lying in the grass. Disturbed but in a hurry, believing himself to be the victim of a prank, he concluded it was a CPR practice doll stolen from one of the schools. 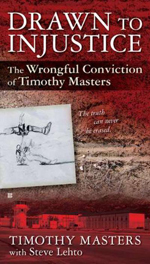 It wasn’t, but rather a stranger to Tim, Peggy Lee Hettrick, who had been stabbed and mutilated. Because he hadn’t reported the crime and lived next to the scene, Tim quite naturally became a suspect, and then, quite inexplicably, remained the only person the police investigated in any real depth. At no time, then or in the future, did the authorities claim there was any concrete physical evidence implicating Tim in the crime. The single footprint he left in the field was far from the body and on top of the drag trail, indicating that it was, as he said, left after the murder. The numerous other footprints of men’s shoes were never identified. Instead, the police’s certainty was based on the things found in Tim’s room – an extensive knife collection, none of which were missing or contaminated, and a rather macabre group of writings and drawings reflecting his interest in scary movies, none of which depicted anything like the horrors inflicted on Peggy.

The police used their entire repertoire of questionable techniques in order to break young Tim during lengthy and repeated interrogations, but not having committed the crime, he stubbornly refused to say he had. With no evidence, no confession and no inclination to consider another suspect, the investigation languished. More than a year later Tim decided to escape and join the Navy, determined to put the incident behind him.

Unfortunately the authorities in Fort Collins remained fixated on the fact that they had only one unsolved murder on the books and only one suspect, and were able, eleven years later, to secure an arrest warrant on the basis of new forensic evidence. This evidence was not, however, DNA or anything physical, but an opinion by one of those heroes of novels and television, a psychological profiler, who, seeking to make a name for himself, concluded, despite never having met Tim, that his drawings and writings somehow provided indisputable proof that he had committed the crime.

Generally I find the trial portions of true crime books to be tedious, and have a rule that if they occur too early in a book, the book probably isn’t worth reading, but Drawn to Injustice proved to be an exception, simply because I wanted very much to know how an innocent man could be found guilty and sentenced to life imprisonment despite a total lack of evidence.

In fiction, such injustice is almost always the result of obvious evil. The coppers in Doyle and Christie may be incompetent, but when the truth is revealed, they gratefully accede to it. Even in the darker noir fiction of Hammet or Thompson, the bad lawmen are either total psychopaths or on the take, knowingly abusing the innocent for their own twisted motives. The authorities of Fort Collins, Colorado were none of these things. Although it was by no means unanimous, the authorities with the most power honestly believed that they were doing the right thing, that Tim was guilty, and once they prematurely convinced themselves of this, put all their energies into getting their vision of “justice” done. Even in 2008 when the final story of suppressed evidence, ignored suspects and egregious misstatements in court finally emerged, the DA and police weren’t revealed to be evil, but still obsessively convinced of Tim’s guilt, rendered oblivious by their fear of embarrassment and the All-American desire to win at any cost.

Another neighbor of the field where the body was found was a prominent local doctor, later revealed to be a sex predator, who was ignored as a suspect because, well, he was a prominent local doctor. The fact that our society is ever more increasingly weighted in favor of the privileged “winners,” is easily illustrated by a simple question – would Timothy have gone through the hell he did if his name were, say, Rockefeller?

Which brings me to The Man in the Rockefeller Suit, and the truths about America uncovered by its protagonist, an individual of many identities whose ultimate expression was Clark Rockefeller. Author Mark Seal does a masterful job of describing the literal character development of an ambitious, amoral German teenager who came to the States in search of the good life. Although the imposter is a mystery fiction staple from Tey’s Brat Farrar to Highsmith’s Ripley, Clark never made the mistake of impersonating an actual person, or even like Melville’s Confidence Man, assuming a kaleidoscope of identities, but rather refined a character, like a workshopping improv actor, studying first movies (Hitchcock was a favorite) and sitcoms (Thurston Howell III an influential role model), and then immersing himself in moneyed American society, beginning, of course, at the local Episcopal church. 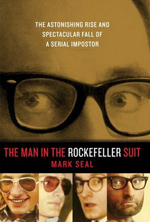 One night on one of his occasional flights from a burnt out identity and in the company of one of the many deluded women who empowered him, he found himself unable to get a table at a fancy restaurant, and improvised a brilliant name that soon had him seated at the best table in the house: Rockefeller. Clearly he was on to something.

That Clark was able to get away with so much (including, perhaps, murder) for so long on the strength of such a flimsy facade is very telling. Seal sees something in him that echoes the behavior of the authorities of Carson City:

Perhaps he is a twisted aberration of the boom years on which he thrived, the years in which people felt entitled to do whatever it took to win. Life was a game and the man calling himself Clark Rockefeller saw himself a victor, above the rules, the ultimate narcissist in the golden age of narcissism.

Although Clark did don the great gilded Emperor’s clothes of the venture capitalist and junk bond magnate, he also uncomfortably models the dirty laundry of our time. Maybe Clark was just a man slightly ahead of his time, a time when by merely having the name Hilton or Kardashian or exhibiting stereotypical, overboard narcissistic behavior, a shameless character can achieve fame and fortune. Maybe he just needed his own reality series: The Unreal Rockefeller of New York.