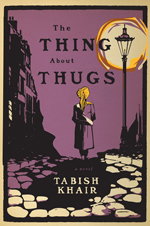 This exquisite little volume would be a lovely addition to the library the narrator describes as belonging to his Indian grandparents.  Their dusty old house was a treasure trove of books and as the narrator discovers, of stories.  His own story is elegantly told but complicated and layered – you have to pay attention, though the light shines brighter about midway through the book when certain narrative identities are confirmed.

The narrator is a framing device for a story set mostly in London in the 1840’s, with flashbacks to India.  It is clear that the main actors are Amir Ali, Captain Meadows and a shady crew led by John May and working for a certain M’Lord.  Interspersed with love letters and the recounting of Ali’s adventures as an Indian Thug, is the relating of the story where M’Lord is looking for interesting skulls for his phrenology collection.

Phrenology is a long discredited “science” whereby people “read” the bumps on someone’s head to determine their personality.  To the Victorians, it seemed to make sense, and to M’Lord, slowly accumulating a museum of skulls, it’s meant to prove his theories to the world.  How the skulls are acquired are another story, and as headless corpses begin to appear all over London, there’s an outcry, fanned by a reporter who is certain the killer couldn’t possibly be an Englishman.

While the story Khair relates here is is technically a crime story, his concerns are more about prejudice and appearance.  His main theory seems to be that how people appear to the world – including their skin color – colors what happens to them and what they do, how they behave.  As he relates the various and sundry stories of many different kinds of people in the book – set apart by class, race, sex, and simply having a bit of cash – you can understand, from your far away viewpoint across time, how and why these people behaved as they did.  The author finds something inevitable in the way the world has forced them to present themselves.

As the story itself is an interesting one and you become more invested mostly in the life of the spiritually delicate and lovely Amir Ali,  you’re also caught up in the crime story.  The twist concerns how the villains are caught, not in who they are, as you know their identities from very early on in the narrative.  Even the villains’ actions are presented as somehow inevitable.

As well as the rich food for thought this novel provides, we are also gifted with a visual portrait of 1840’s London and the far-away perch of India.  How, the narrator asks at one point, could I like Jane Austen?  Austen’s books are on the shelves of his grandfather’s library.  But as the narrator realizes, while the clothes and customs and classes are different, the behaviors are universal.  The same applies to the characters in this novel, some of whom may seem familiar to you.  This is a book well worth devoting your time and attention to.  It’s full of rewards for any thoughtful reader.