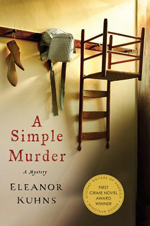 The Shakers were a “charismatic Christian” sect formed as an offshoot of the Quakers, sharing some of their more advanced concepts like equality between the sexes and pacifism.  Because the Shakers didn’t actually reproduce, they have now practically died out. However, back in the 1700’s the communities were vital ones, as they took in children (and other lost souls, no questions asked) via adoption or abandonment.  In this way, the main character’s son, David, has come to be a part of the Shaker community.

Kuhns comes at her story in a very gentle way, but the number of killings contained within the plot prove her to be every bit as ruthless as Agatha Christie, who frequently had a very high body count.  Also like Mrs. Christie, Kuhns seamlessly blends the social setting and characters she is writing about into her mystery.

Because Rees, the main character, has had some experience both in the army and during his travels unmasking killers, he is asked to lend a hand when one of the Shaker sisters is killed.  The murder seems to point to someone within the community, but for the life of him Rees can’t connect the sister’s death with a growing string of deaths and mysterious disappearances, nor can he figure out how she was killed on the quiet Shaker grounds with no one hearing anything.

His “assistant” is one Lydia Jane Farrell, who has left the community for unknown reasons, but who can provide a bridge between Rees and the Shaker sisters, many of whom are unaccustomed to talking to outsiders.  While Rees is treated with generosity by the Shakers – he’s given room and board as well as a place to set up his loom and work – he’s also treated with a certain wariness, as, like all good detectives throughout mystery fiction, he is an outsider.

Lydia Jane proves an intelligent and fearless assistant, though she becomes emotionally involved as she knows almost all of the victims.  The other main thread is the reuniting of Rees and his son, who resents him for leaving him alone after his mother died with his aunt and uncle who, it becomes clear, have not treated him with all the loving kindness one would hope for.  The writing about this father and son is wonderfully well done.

While this is a very traditional mystery with an actual summing up by the main character at the end, it also seems to be organic in the way the story unfolds so inevitably, each plot point and character growing from another.  It all seems completely natural in every way, and I think some of the reason for that is the exquisite insight the talented Ms. Kuhns has into her characters.

She’s set the book up as the first in a series, one that doesn’t seem as though it will continue in the Shaker community, but the threads she leaves hanging at the end of this first novel are tantalizing ones.  This is an enjoyable and thoughtful read, and I’d certainly be more than willing to follow Rees on his next investigation.