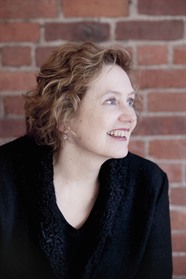 Eleanor Kuhns is the author of A Simple Murder, set in a 1700’s Shaker community.  This is her first novel.

Q: Your book won the MWA/Minotaur contest.  Can you talk about that experience a little bit?

A: I think my first reaction was disbelief. I’d been writing short stories for a long time but with very mixed success. When my mystery was accepted (and Minotaur was the first publisher I sent it to) I spent about two weeks after hearing I’d won expecting a phone call telling me it had been a mistake. Attending the awards ceremony was a dream come true. And it gave me another goal to shoot for: winning an Edgar.

Q: How did you pick this particular time period?   It’s an interesting one that few mystery writers have really utilized, There’s so much change and commotion after a war, so it’s a rich territory to mine.  Will the post war aspect play into future books?

A: The reasons I chose this time are included in your question. I find this period fascinating, Plus, I am enthralled  by the Whiskey Rebellion, a ‘civil’ war fought over many of the same issues we face today.  Four years after the ratification of the Constitution and the infant country almost broke apart! I hope to write a prequel to  A Simple Murder that is set during the Rebellion.

So many things happened during this time period, right up to 1816 when the Industrial Revolution put an end to traveling weavers, that I plan to have Rees travel around and solve mysteries all over the new country, set against that “change and commotion.”

I also thought that since Rees was a soldier with connections and experiences from the War, I could draw upon that. Maybe a prequel that takes place during the Revolution and at some point a book about Philip, the Iroquois guide, from whom Rees learned so much.

Q: Why did you decide to write about the Shakers?   The sum total of my knowledge of the Shakers is that they made beautiful chairs and didn’t marry and have children, which I bet is pretty general.  Can you talk about what drew you to them, and also how you did your research?

A: I lived in Maine when I started A Simple Murder. The only remaining “active” Shaker community is New Gloucester, Maine and it still has four living Shakers. A visit to the community, a tour and the purchase of a number of books, sparked the idea. The tour guide had a personal relationship with this community, her mother was a child raised by the Shakers, so that really stimulated my interest. I borrowed quite a few books from the Library and since then have visited other Museum Villages. I have now accumulated quite a library of my own. And of course the Shakers were thriving during the time period that is my main interest.

Q: While you are far from the only female author to do this, I always think it’s interesting when a female writer picks a male protagonist.  Any thoughts on why?  I love Rees, by the way, I’m just curious.

A: I originally chose a male because the lives of women then were so circumscribed. But as I worked with him, he became something of a tribute to my father, not well educated by today’s standards, but intelligent and a craftsman. I also wanted  a mature man, old enough to look back on his life and feel some regrets.

Q: Let’s talk about weaving.  Are you a weaver?  I love the way you write about it, and the book sent me to google some images of weavers (Colonial Williamsburg has some nice photos).  If you’re not a weaver, what drew you to this specialty for Rees?

A: Yes, I weave. Textiles are my passion. I started as a quilter many years ago (I was taught by my grandmother with patterned flour sacks), moved on to dyeing my own fabrics, then to dyeing fiber, well, you get the idea. I wanted someone who traveled and since I know something about weaving it was a good fit. Plus, weaving was one of the very few non-gender specialties at that time so it gives Rees an in with the women. I did not want to write solely about men.

Q: I really enjoyed the changing and developing father-son relationship in this book.  Lots of nuance there, and lots to work with.   Can you talk about these two characters a little bit?

A: Relationships among family members are always complex I think and since most people remain tied to their families their whole lives those relationships are ongoing. I wanted to write about a conflict where neither character was wrong in how they felt, but neither was completely right either. Of course David would feel abandoned and not see that his father was trying to secure their future. And Rees, a traveler anyway, and now so torn up by his wife’s death he can’t cope, would want to escape. My hope is that their relationship will continue to grow and change.

Q: My favorite character, though, may be Lydia Jane.  What an interesting mixture she is.  How did she develop for you?

A: This is a tough question. I knew I would need someone to chaperone Rees but Lydia just sprang to life on the page. Still not sure how that happened.

Q: What brought you to mysteries?  Have you always wanted to write a mystery?

A: I love mysteries and have read them all my life. It is not just the puzzle aspect but the fact that humans are capable of great altruism and then of killing one another. What an interesting dichotomy. I doubt I will ever write about a serial killer since I am interested in the why of how people behave, especially for such a horrifying act as murder. And to combine that with a historical era in our country that was fascinating in it’s own right. Life just doesn’t get better than this.

Q: What starts your process – setting, character, plot or all three?  All three are essential and I will read books that only feature two of these elements in a strong way, but never only one of them.  I think your book is a wonderful combination of the three.

A: For this one I started with some of the characters: Rees, David, Mouse (in those days where would the disabled go?), and Caroline. (I find the interactions between siblings another fascinating topic to explore) and the setting. I am what they call a ‘Discoverer,” I write a first draft as it comes to me  so I don’t plot every nuance. For me, the characters frequently drive the plot and as they grow and change the plot does as well. When I end up with answers I like, I rewrite over and over until I get the story.

Q: Who are your writing influences?

A: I read so many mysteries I’d have to say everyone? I love C.J. Box and Michael Connolly. I also read Peter Tremayne, Jennifer Chiaverini, James Lee Burke and Nevada Barr. All have something unique. But I think the authors that have influenced me most are Barbara Hambly (of the Benjamin January series), Anne Perry and Agatha Christie. I still think she is the best plotter in the business.

Q: And finally, what’s ahead for Rees?  Do you want to give us a little preview of what you might be writing about in the next book?

A: In the next book, Death of a Dyer, I send Rees, Lydia and David back to the farm in Dugard. Shortly after their arrival, Rees’s best friend from his childhood is murdered. While he investigates that, I hope to show why he left Dugard in the first place, as well as further explore the relationships he has with David, Lydia and Caroline. Along the way, I work in information about dyes and dyeing.