S.J. Bolton, one of the most original of all contemporary crime writers, has apparently decided to embrace a series identity instead of writing a string of stand alones.  Her last novel, Now You See Me, was, for her, her most conventional book.  It’s a police procedural set in contemporary London, though she added her own twists to the formula: the story was rooted in Jack the Ripper lore, and she used a gender lens to tell her story, subtly including a female-centric point of view throughout. 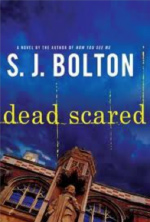 This new novel is a follow up to Now You See Me, using the characters of Lacey Flint and Mark Joesbury from the last novel, and the character of Evie Oliver from Blood Harvest. And really, as one of Bolton’s strengths as a writer is creating memorable and vivid characters, it makes sense to reuse them.  In this novel, Lacey is undercover in the safest of all locales: Cambridge University.  Or is it?  As Dorothy L. Sayers (Gaudy Night) and Elizabeth George (For the Sake of Elena) have proven before her, Oxford/Cambridge can be a creepy and threatening place despite its charm.

Bolton’s other skill is setting, used to great effect in her first three novels, and I think part of it was that the settings there were more exotic – the Shetland Islands, for example – London and Cambridge have had their exposure.  What she does well here is describe the beauty of Cambridge, while layering on the threatening aspects as her story moves forward.  It’s kind of like a Hitchcock movie:  it seems normal and harmless, even lovely, but as more layers are unpeeled it’s far from it.

She also uses a timetable to great effect, accelerating the suspense while fitting together the parts of her story like an expert watchmaker.  Our book club recently read Kate Atkinson’s Case Histories which also uses a timeline, but in Atkinson’s case, the timeline had little relevance to the plot.  Here, it’s essential.  Bolton begins the story with Lacey ready to jump off the roof of a building, then works backwards from there.  As you read, you are thinking the whole time: how has Lacey gotten to that point?  It’s not clear until almost the end of the novel, which of course indicates the skills of a top notch suspense writer.

Lacey has been called in by Joesbury to merely observe and report.  Being an excellent cop with time on her hands (she’s not an actual student, after all) she can’t help herself.  She begins to investigate.  What she’s there to try and find out is why there have been an unusual number of suicides – most of them using unusual methods – at Cambridge.  The thought is that someone or something is encouraging the students to kill themselves, and the jumping off point is possibly some kind of suicide website.

Lacey works with Evie who has assumed the role of Lacey’s tutor, as a cover.  Evie has her own suspicions, and some of whatever is going on also seems to be affecting her as she’s being stalked by someone, with a series of creepy incidents becoming creepier as they move forward.  Bolton really has the skills of an old fashioned gothic story teller – think perhaps Wilkie Collins or Daphne DuMaurier – and she applies them perfectly to the contemporary crime novel.  Your heart is frequently in your throat as you read.  As I got toward the end of the book, reading it was almost like picking a scab – you know you shouldn’t, but you just have to look.  Unlike a scab, however, instead of nice pink healthy skin underneath, there are lots of creepy things under the rocks Bolton the storyteller has strewn in the reader’s path.

This story is told with precision, but Bolton also squeezes what I’d call the “juice” out of the story as the characters are indelible, and she really makes you invested in them.  Lacey sitting at the bedside of one of the unsuccessful suicides is especially heartbreaking, as in some way are the parts of Cambridge that are simply lovely that sometimes dapple through the story.  It makes the book as a whole sparkle.  Whatever incarnation Bolton chooses to continue her writing career, I’ll be happy to be reading over her shoulder.  She’s an amazing talent.