The best true crime books have a few things in common.  One is a vivid setting, one that’s well described and felt.  Even better is an unusual setting – in this case, the setting is Peking right before the Japanese took over in 1937.  Another thing is a sense of outrage at what happened to the victim portrayed in the book – and the victim needs to be portrayed, not just presented as a dead body.  Just like in a fictional mystery, investment in the victim is investment in the outcome of the story. 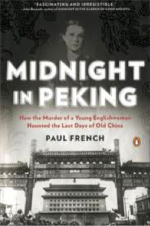 Also the very top notch true crime books don’t spend too much time in the courtroom.  Anyone can go to a courtroom and take notes, not everyone can craft a narrative that’s compellingly told.  Paul French rarely dips a toe into the long ago courtrooms of China. And Mr. French does one more thing I’m a big fan of (and it’s rarely done) – he structures his book like a whodunit.  The reader doesn’t know whodunit it until the end of the book, and like any good whodunit, it’s a jaw dropper.  Books sharing this characteristic would include Edward Keyes’ The Michigan Murders and Kate Summerscale’s instant classic The Suspicions of Mr. Whicher.

Like Summerscale, French sets his book in the past, and like Summerscale, he gets some of the  juice of a good crime story by making the reveal of the murderer almost unbelievable.  If it was fiction, you would probably set the book aside in disgust.  But that’s the beauty of it all: it’s true.

And it’s a story you feel might be better known, because it’s so terrible.  One night in 1937 a young Englishwoman living in Peking is found brutally murdered – so brutally, that it makes almost no sense unless the killer was completely psychopathic.  As French begins to roll back the layers of Pamela Werner’s life, it emerges that she’s the spoiled only daughter of an often absent academic father, a girl whose mother died before she could even remember her.

As Pamela grew, she grew wild, getting kicked out of several schools.  When we join her, she’s been sent to a strict boarding school by her father in hope of changing her life direction.  In the book, the reactions of her friends at school and at home are the same:  “That’s Pamela?”  The school girl Pamela looked her age (19), dressed in a drab school uniform; the at home Pamela was all decked out in fancy clothes with an up to the minute hairstyle.

Her father was devoted to her, and one of the things that propels this book is his grief.  It’s sometimes impotent grief, as the contentious Edward Werner had burned many bridges throughout his professional life.  As he reached out to the authorities, again and again, he is frequently rebuffed.  It’s heartbreaking.

The two policemen investigating the case must work in an uneasy partnership – one is a Chinese, Colonel Han, and one is called in from out of town, an Englishman, Dick Dennis.  As they can bridge essentially two cultures, they actually make a good team.

All of foreign Peking lived in a separate area of the city, the Legation quarter, and Pamela and her father were no exception.  This quarter was literally surrounded by a wall – though Pamela made her way freely all over the city on her bicycle.  In fact, on the night in question, she’d gone off on her bike to meet a friend and go skating.

French’s portrait of 1937 is a vivid and layered one, revealing all the different levels and classes of Peking society, from the upper class foreigners in the legation to prostitutes and madams and aimless white Russians, drinking their lives away.  At the same time the portraits of Pamela, her father, Han, and Dennis are just as finely drawn.  And he doesn’t waste time telling the story – it moves at a brisk pace.

It’s a heartbreaking tale, and a rich portrait of a very specific, very tragic time.  This is a beautifully done and intelligent book.