This is the 27th Gregor Demarkian novel, making Jane Haddam one of the steadiest performers around.  Each year she publishes a polished, thoughtful novel, with one of the more endearing of contemporary detectives.  While she surrounds Gregor with the Philadelphia and specifically Armenian neighborhood where he grew up and still lives, my favorite part is when Gregor is off cracking the case. 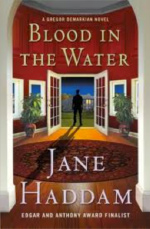 Long ago in the first novel (Not a Creature was Stirring, 1990), Gregor met his now wife, Bennis, a member of the Philadelphia mainline.  In that novel I was frustrated to discover that Gregor was a widower, and that Haddam was not going to give her readers much more detail than that.  However the meeting of the intelligent Bennis and the practical Gregor, over the killing of a member of her family, remains one of the great mystery couple match ups.

Haddam put off getting them actually married for quite awhile, but now they are and Gregor is feeling a bit uprooted as he and Bennis have bought a townhouse in the neighborhood and Bennis is carefully and thoroughly renovating it before they move in.  The death of Gregor’s beloved downstairs neighbor, Old George, has left him depressed and pondering the meaning of life.  His wife and neighbors think he needs a distraction.

As Gregor, a former FBI agent, works as a special consultant to police forces, a case is indeed offered to him: that of the mysterious deaths in a nearby gated community called Waldorf Pines.  While Haddam decorates her books with all kinds of thoughts, some random, some profound, and some just irritating, what she’s really good at is writing a pure traditional mystery.

She’s a total pro.  She sets the stage, she lays out the characters, and she makes most of them so memorable that remembering who did what is never a problem.  In this book the two deaths occurred apparently at the same time but also appear somehow weirdly unrelated – the body of a local teen has been found with his skull bashed in, floating in the club pool; at the same time, another completely charred body has turned up in the locker room of the pool house.

As Gregor makes his way through Waldorf Pines, unraveling secrets and finding clues, Haddam the writer lays in a background of suburban privilege and entitlement.  The characters are all sharply observed, especially a very spoiled teenage girl, LizaAnne.  While the police procedural parts are always a bit murky, Gregor works more like Hercule Poirot than Lenny on Law & Order.  He uses deduction, intelligence, and common sense to discover the perpetrator.

While the solution is a surprise, it’s the satisfying way the story is told that always makes me come back for another Gregor Demarkian installment.  If you can get your hands on the first novel, start there, but if not, this is as good a place to start as any.  Gregor, through the lens of his talented creator, will surely work his charms on you as well.