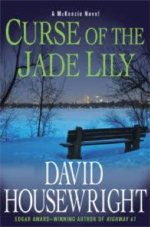 Donatucci snorted.  “Everything but the cape and the car,” he said.  “Tearing around, working with the cops; sometimes working against the cops; doing good for goodness sake…”

Miss Robert B. Parker?  There’s really no need – give the excellent David Housewright a try to fulfill your Spenser jones.  All things being equal, Housewright would be as well known a quantity as Parker, as their skillsets are not only similar but similarly enjoyable.  Housewright’s central character, Rushmore MacKenzie (though he goes by MacKenzie, and can you blame him?)  lives in St. Paul rather than Spenser’s Boston, and he has no sidekick, but other differences are less discernible.

This is far from a cut as I’ve enjoyed Parker’s novels and his great creation as much as anyone.  And Housewright’s novels, while perhaps slightly more complex than Parker’s, have a wisecracking tone that’s very comfortable and familiar.  MacKenzie  is so much the “White Knight” that he doesn’t even charge his clients anything.  He doesn’t need to – he’s independently wealthy thanks to a long ago insurance settlement.  He doesn’t like to work, but he likes to keep busy, and when he sees a wrong, a good way to keep busy is to right it.

While in this novel MacKenzie has been sought out by a paying client, that isn’t usually the case.  He’s approached by the very insurance agent who made the original payout to him, on behalf of a new Minneapolis art museum.  A priceless treasure known as the Jade Lily has been stolen and for a museum this new, publicity about a high profile theft can be nothing short of a disaster.  And – oh yeah – the artnappers have asked that MacKenzie – much to the insurance guy’s disgust – be the go-between.

MacKenzie reluctantly accepts – he likes the young museum director and the forensic art expert who authenticated the lily – and then he’s off on a convoluted path involving double crosses, Bosnians, rich guys, competing artnappers, and multiple claims of ownership of the Lily.  MacKenzie’s clear sightedness and quick action can get him into trouble but mostly it helps him cut through an enjoyable thicket of tricksters and con artists.

Housewright’s wit is every bit as sharp as Parker’s, and as I read along, I was chuckling to myself over bits of dialogue and acerbic observations on MacKenzie’s part.  While this book doesn’t have the emotional resonance of some of Houswright’s earlier titles – notably Tin City, A Hard Ticket Home or Madman on a Drum – it still has the snap and crackle of great storytelling.  I can’t think of a better way to spend a couple of evenings than curled up with a new David Housewright novel.  Check it out for yourself.