I guess I believe in doing my best, trying to be a good guy, be nice to my mom, take care of the people I love.  Is that good enough? 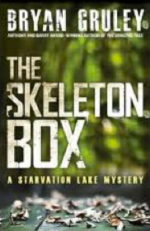 One of my favorite things about selling books is watching an author grow not just career-wise, but grow as a writer.  Each book of Bryan Gruley’s is better than the last, and this third in his Gus Carpenter series really hits it out of the park.

His first novel, Starvation Lake, established Gruley’s character.  Gus has come back to Starvation Lake from a big time Detroit paper to run the tiny Pilot.  The balance of kinship, friendship, and community ties and history are finely drawn in the first two novels (the second is The Hanging Tree), but in this third installment Gruley goes to the heart of the matter: family.

Usually a book that has lots of hockey in it isn’t one that will make me cry, but this book really got me.  The amount of hockey in the books (a personal and life long passion of Gruley’s) has been declining, just as Gruley the storyteller amps up his game.  This one has the least amount of hockey, and there’s a redemptive quality to it.  It also is tied into the essential story line, so the book without the hockey wouldn’t make sense.  And that’s how it should be.

Hockey of course gives a specific flavor and zip to the stories, and a real note of authenticity.  In this book, though, the true focus is on Gus’s mother.  Gus speeds to his mother’s house in the opening scenes to discover that her best friend, Phyllis, has been attacked and rushed to the hospital and his mother in a state of shock.

Gruley unsentimentally lays out his mother’s increasing memory related struggles; she has good days and bad days, but the death of her best friend begins to bring the past to life, as does her friend’s last word.  Gus’ love for his mother is clear; she pushes him to investigate more.  Helping Gus is his crusty ace reporter, Luke Whistler, who hustles the story for all he’s worth.

It becomes evident early on in the story that whatever happened to Phyllis is related somehow to the Catholic Church and the long ago disappearance of a nun.  Gruley bases the bones of his story on a true incident (see Mardi Link’s fine Isadore’s Secret) where a nun disappeared and a long cloud of suspicion settled in over the parish.  While Gruley utilizes the bare bones concept, there the similarity ends.  Like any good story teller, he twists the narrative to suit the needs of the story he has chosen to tell.

What’s really powerful and moving is the connection not only between Gus and his mother, but his mother’s connection to her long time best friends, both of whom are now dead.  As Gus races toward a resolution, one his mother has nudged him into finding, he discovers things even she didn’t know, though the ultimate revelation really belongs to her.  The way Gruley honors this character without hitting the reader over the head with it is really well done.

The details of life in Michigan – down to the Better Made potato chips served up at the local bar – add lots to the story.  So do the hockey details, which are just enough, and just specific enough, to give you a real flavor of the ice.  This is a wonderfully told story and a moving novel.