In olden times Loren Estleman would have been regarded as a master craftsman.  He’s sixty plus books into a more than impressive career, setting the bar high in both the Western and the Private Eye genres, while also writing the occasional standalone as well as a couple other mystery series (Peter Macklin, Valentino).  This outing is the 22nd in his Amos Walker franchise, the present gold standard for private eye mysteries.  Sure, there are other private eye masters at work right now – Robert Crais, Steve Hamilton, and S. J. Rozan come to mind – but for the pure, traditional private eye experience no one can beat Estleman. 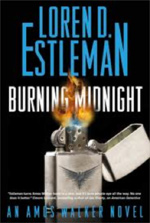 His prose is only one reason, but it’s a big one.  Laced with sly humor and original descriptions of both people and places, reading an Estleman novel is a rich experience.  For a novel on the short side, the reader gets a lot of bang for their buck.  This one is set in the Mexicantown area of Detroit.  While it’s “Mexicantown” there’s a reference to the coiled and dark world of “Chinatown” (the film), and the overhanging, deteriorating beauty that is Detroit suffuses the book with atmosphere and menace.

Walker is strictly old school, smoking cigarettes, swigging vodka and tequila when he comes across it, getting around town in a beat up muscle car, unencumbered by familial baggage.  He’s the classic loner, working in the white knight mode dear to every P.I. from Lew Archer and  Phillip Marlowe down to the present.

He’s asked by an old frenemy, Inspector John Aldercyce,  to try and find the missing teenage brother of his son’s wife.  The kid, Nesto, appears to be caught up in a Mexicantown gang, and Alderdyce is hoping both to find him and scare him away from the gang life.  The understanding way Estleman writes about this particular teenager is dead on, with their mixture of lying, fear, bravery and stupidity.  Walker is more forgiving and understanding than some of the other folks in the Nesto’s life.

Things take a wrong turn when one of the Mexicantown leaders is gunned down – the death of El Tigre doesn’t go unnoticed by anyone, and Nesto seems like he’s in the frame for it.

In reality, every P.I. novel has a certain trajectory – the detective squeals around town interviewing suspects and looking for clues – what sets any of them apart is the point of view, the writing, and the characters.  Estleman’s writing always sparkles.  He also gets in a few digs at present technology.  Here’s a favorite:  “…you can become dependent on technology of you have constant access to it.  That made me the most independent detective in the 313 area code.”  And this of course underscores Walker’s good old fashioned detective work – like Holmes, Poirot and Nero Wolfe,  he relies on logical deduction and plain brain power.

The plot is suitably tricky, I was surprised at the end, and I enjoyed the Amos Walker guided tour of Mexicantown.  Twenty-two books in, this is still a fresh, vibrant, and classic series.