“…You have to suck at it for years until one day your experience pays off and you reach a point where you know what you’re doing.” “It’s like everything else, then, isn’t it?” 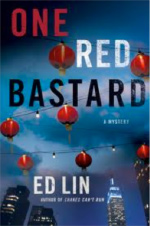 I was a big fan of the first book Minotaur published by Ed Lin, Snakes Can’t Run, and I enjoyed this one maybe even a little bit more.  Lin’s central character, Robert Chow, is a Chinese American Cop in New York City’s Chinatown circa 1976 (Carter and Ford are battling it out for the presidency).    Robert has a good backstory—he’s a Vietnam Vet, he was a drunk but is now sober, and he is now feeling his way through his job, hoping for a detective’s gold shield as well as trying to figure out  his relationship with his girlfriend, Lonnie.

Lin’s deceptively simple prose is actually very vivid.  Here’s his description of Lonnie’s dad, when encountered by Robert for the first time:  “I was a little taken aback to find that Lonnie and Paul’s dad was a fairly small guy, barely five feet tall.  In my imagination, he was a hulking linebacker brandishing a belt.  In reality he was a thin man in his late-fifties and his hair had thinned out to black streaks smeared over the top of his head like skid marks.”  Reading that brief description, you won’t forget this man.  All of the sidebar characters are this well delineated, making reading this actually very short book a very rich experience.  This distinctive prose is only part of Lin’s charm, though.

Lin is very interested in this novel in the different strands of the Chinese Communist party—the kick-off for the plot concerns the advance man for Mao’s daughter, Mr. Chen, who is murdered while he’s in town.  Robert becomes obsessed with Mr. Chen’s death because his girlfriend is the prime suspect: she was the last one to see him alive, after she’d interviewed him for her wire service.  Lonnie is being followed everywhere by detectives from Manhattan South and it’s driving Robert crazy.

The total setting for the novel is a very full one—the police department and the inner workings of the communists in New York, as well as the many ties Robert has to his community and family.  Lin is very interested in the way systems work—how does the police department work?  How do community and political ties work?  What ties are the most important, or are they interwoven?  Robert’s obligations of family and duty often butt up against each other, just as they do in everyone’s life.

Such concerns are seamlessly integrated into an absorbing story—as Robert follows the clues that lead him to Mr. Chen’s killer, some of his actions seem questionable after the fact.  Lin’s gentle moral prodding about the way the police department works will get you thinking.  It gets Robert thinking as well.  It’s part of what makes him such an interesting character, one you want to follow further.

The sly humor that’s a backdrop to the whole story doesn’t hurt, either.  Some of the observations about the Chinese culture are so wryly and beautifully observed that they stick with you.  Since the books are set in 1976, it truly is like entering another world.  The time remove just adds another layer of “otherness,” but since it’s the recent past, your own memories may step in as you read, adding to the total experience.  Lin is an original, gifted writer with an offbeat slant that lets you look at the world maybe a shade differently.  Any writer that can achieve that is well worth a look, in my opinion, and it’s the main reason I enjoy reading.  So remember this name:  Ed Lin.