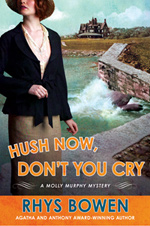 Molly, for the uninitiated, is an Irish immigrant who came through Ellis Island in the first book, which was set in 1900.  Now ten books into the series, Molly has had her own private detective agency (though the fate of her agency is up in the air), and she has at last married her long time suitor, New York City police detective Daniel Sullivan (see the last book, Bless the Bride).  Daniel has asked Molly, now that they are married, to settle down and give up her private detective agency.  So far his plan isn’t working out too well.

Molly defines the word inquisitive so she’s a natural detective, one who has worked with Daniel in the past on other cases.  The books have taken Molly all over New York – working undercover in a shirtwaist factory, to Chinatown, as an assistant to Harry Houdini, and many other places.  Her best friends, a gay couple who live across the street, Gus and Sid (they are female), bear a striking resemblance to Nancy Drew’s buddies Bess and George.  And Molly is very much a grown up Nancy Drew, with far more shadings, naturally.

In this outing Bowen takes the tropes of both the haunted house book and the locked room mystery to create a very uncomfortable honeymoon atmosphere for the newlywed Sullivans.  Because their honeymoon had gotten derailed they have taken up the seemingly generous offer of the powerful New York City Alderman, Brian Hanna, to stay in the guest cottage on his Newport estate.  While the Sullivans are staying in the guest cottage – one which very much reminds Molly of the cottages of her native Ireland – the rest of the Alderman’s family, squabbles and all, have appeared in the main house.

When Molly and Daniel arrive she thinks she seems a ghostly face in one of the main house windows, an idea Daniel scoffs at.  As their honeymoon progresses, the Alderman, not unsurprisingly, turns up dead, and Daniel develops a very serious case of pneumonia.  While I knew in my heart that Bowen had probably not painstakingly created the vivid character of Daniel over the course of ten books only to kill him off, she is so good at what she does that I was literally on the edge of my seat, worried about the outcome of Daniel’s illness.  I’ll just say anxious tears were shed.

Meanwhile, of course, this gives Molly free reign to investigate the mysteries of both the ghostly face in the window and the Alderman’s death.  Hanna’s family is somewhat hostile to the Sullivans and fairly dysfunctional.  The housekeeper also seems to be hiding something, though she’s sometimes friendly, she’s also sometimes standoffish.

Bowen is truly a classic mystery writer in that the story she has created is actually mysterious.  There are several threads, many puzzling ones, and there are fair clues, red herrings and a fairly laid out solution to the crime.  She’s also able to create vivid characters, not just the ones of Molly and Daniel, but all of the Hanna family, Daniel’s mother, and Gus and Sid, are completely realized.  Last time Ms. Bowen visited Aunt Agatha’s  I mentioned that I was sad that I had raced through the book so quickly – with a disgusted look, she mentioned how many months it had taken her to write it.  Well, so sorry, Ms. Bowen, but when you’re this good at what you do, readers are going to inhale your stories, just like I do.  As I’ve said to many a customer, happy reading.