I caught a glimpse of myself in a dark window: a gaunt Valkyrie holding a spear taller than I was, teeth bared in a drunken grimace and eyes bloodshot from some redneck teenager’s ADD medication. 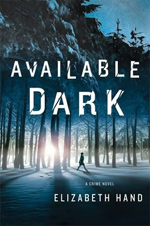 Neary has many of the qualities more expected in a male noir protagonist. She’s violent, bad tempered, substance abusing, cynical, haunted, corrupt, but yet able to tell the difference between right and wrong at the crucial moment and equally able to act decisively on that knowledge.

Above all she’s a survivor, who despite her punk motto No Future, has found herself stubbornly living on. A devastating rape and the collapse of the New Wave into the Reagan years have left her barely functional, working (unhappy wretch!) in a bookstore, unable to connect with anyone or anything.

In Hand’s second mystery Available Dark, Cassie having to some small extent achieved redemption, not to mention cash, from her first adventure, finds the past reaching out to shove her into a perilous future. Her signal artistic achievement, a long out of print book of photographs called Dead Girls, a punk era chronicle somewhere between Cindy Sherman and Weegee, has developed an underground life of its own, becoming a sort of loadstone that attracts morbid, artistic and dangerous people into her life. On the strength of its continuing reputation she’s asked by a series of shady middlemen to travel to Helsinki in order to evaluate some one of a kind photographs being sold by a decadent, former superstar fashion photographer.

At the same time another powerful force compels her northward as she’s anonymously mailed her own old photograph of Quinn, the man described as “the only person I ever really cared about,” who she hasn’t seen in decades, the envelope postmarked Iceland.

She consents to embark on the grand tour of cold, stopping in Finland to be floored by the pictures, which, though morbidly suggesting serial murder and ritual killing are also stunning works of art. She then surreptitiously flies to Iceland on her employer’s dime, hoping to find Quinn.

It’s in Iceland that both the writing and the action crank up. Everyone involved with the Helsinki photographs seem to be getting killed, and when she finally encounters Quinn and his own group of shady associates, it’s obvious they’re also knee deep in the whole bloody affair.

Hand’s descriptions of Iceland are especially powerful – a country whose economy is as bleak as its landscape, a noir world of paganism and black metal where no one can be trusted and the very climate is deadly. It all ends in a violent resolution in the middle of frigid nowhere which reveals who the real criminals of the contemporary world are.

Available Dark is as lean and fast moving as its protagonist, but with a strong, meditative ballast and a stark view of the nature and even attractiveness of evil. The northern setting, though undoubtedly trendy these days, is an integral part of the book, the end result leaving the reader anticipating another visit from Cassandra Neary.  (Jamie)