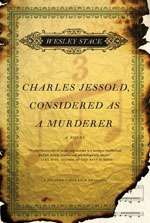 Since the defining era of Holmes and Poirot, the big fishes of these waters have been the series sharks, gobbling much of the available attention and profits with the continuing adventures of a single character or school of characters swimming their way through a number of books. But there are other currents in the genre, rising from the dark depths of the ghost story and the gothic, solitary self-enclosed novels where the seemingly placid surface of everyday life grows slowly menacing and powerful riptides and unpredictable squalls appear. In a way stand-alones are even more unpredictable than series books because in the former no character is guaranteed survival in order to play a part in a future installment – anyone can be killed – or be a killer.

Such a creature is Wesley Stace’s excellent Charles Jessold, Considered as a Murderer. The tale of an early 20th century composer, the eponymous Jessop, who, egged on by the narrator, Leslie Shepherd, a music critic, cuts a controversial and revitalizing path through the world of English music. The evocation of a certain time and social strata is masterful, full of skillful observation and sharply etched characters, but even as I was irresistibly drawn in I wondered, as I often do when presented with a “literary” mystery, if it was in fact a mystery at all. But the foreshadowing  implied by Jessold’s obsession with gory English folk songs and the notorious Renaissance composer and murderer Carlo Gesualdo soon turns very shadowy indeed.

Stace makes enthralling use of material that, let’s face it, sounds a little stodgy. Jessold is a true musical genius, calculating yet abandoned, willing to do whatever it takes to find inspiration and success. The not so good Shepherd is more the typically repressed English type, cleverly and coldly pulling strings, attempting to manipulate Jessold, the press, public opinion and even his own beautiful, enigmatic wife, until everything tangles into something that more resembles a noose. As the narrative’s perspective deepens, the horrific crime that’s almost a given throughout the story begins to assume a different and quite unexpected complexion.

Wesley Stace (better known in some circles by his stage name John Wesley Harding) weaves themes of adultery, murder, betrayal and self-destruction throughout with the assurance of a great composer, maintaining high literary quality while still affording a great read. The whole effect is rather like Ruth Rendell in Barbara Vine mode, a slow and powerful build up capped with a climax of swift, shocking yet somehow inevitable revelation.

I admit I’m more than a little late on this one – it’s a paperback original that came out in February 2011, but I’m very glad not to have missed it entirely. Had I read it when published it would have ended up on our best of the year list, and, even so, I don’t think I’ll read too many better books in the immediate future.