The third book in Michael Stanley’s Detective Kubu series set in Botswana is the best one so far, which is saying a lot.  Stanley’s novels are a complex and nuanced look at Botswana and Southern Africa, combined with a good mystery puzzle and one of the best detectives in contemporary crime fiction. 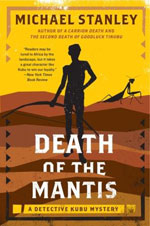 Let me describe Kubu, and see if he sounds at all familiar to any crime fiction fan:  he’s overweight, doesn’t care, loves food and wine,  is a connoisseur of both, and is a brilliant detective.  While “Michael Stanley”  (actually two charming fellows, Stan Trollip and Michael Sears) discount any resemblance to Nero Wolfe, for any mystery fan, it’s plain to see the kinship between the two detectives.

Where Kubu (the Botswana word for “Hippo”) differs from Nero Wolfe is in his happy and committed homelife.  Also he has no servants. Also he will often and willingly leave home, though never without proper provisions. The snapshots of normal Botswanan family life are one of the strongest parts of  all the novels; in this one Kubu and his wife Joy are adjusting to life with their new daughter, Tumi.

The thing that made this book the strongest in the series, to me, was it’s portrayal of the culture of the African Bushmen, a tribe of tiny men and women who are able to disappear into the desert and regard all parts of life as interconnected: nature, men, animals.  To violate one part is to violate every other part and even yourself.

Africa and modern life are encroaching on the Bushmen.  As it happens, one of Kubu’s old school buddies is a Bushman, the two having bonded over being bullied in school (one for being fat, one for being a tiny member of another culture).  This man says passionately to Kubu:   “But what of the future?…The world is closing in like a pack of hyenas circling.  You can’t seal yourself in a time capsule and hope to escape.”

This passion on the part of Kubu’s old friend comes to light when two Bushmen are arrested for the murder of a government employee out in the Bush.  Kubu steps in and begins to unravel the case, one that leads to an obsessive mining prospector, looking for diamonds.  Like any good detective novelist, Stanley includes red herrings, plot twists, and unexpected developments along with good old fashioned police work and an adventure sequence in the wilds of Africa.

The grounding Stanley gives the novel in the culture of Botswana really makes it special.  The portions relating to the Bushmen and their culture make it sparkle even more – the virtual diamond already discovered by the reader.  Meeting Detective Kubu will likely make anyone want a closer acquaintance.  Here’s to many more novels in this wonderful series.