Thanks to Stieg Larsson and Henning Mankell, the axis of the mystery universe has shifted.  Where American readers used to feel as familiar with the streets of London and the interiors of British country houses as with the streets of New York or LA, they can now feel familiar with the streets of Copenhagen, Stockholm, and many other Scandinavian locations. It’s been a slow seepage, but our international fiction section had to claim its own fixture a few years ago, with steady sellers like Cara Black, Colin Cotterill, Henning Mankell, Jo Nesbø and Arnaldur Indridason taking pride of place, and with the advent of the Stieg Larsson trilogy (those books actually have their very own special store location) the lust for foreign fiction has just exploded. 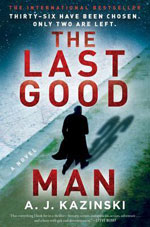 This book, The Last Good Man, doesn’t really have any of the artistic trappings some of the other international offerings have – Karin Fossum’s prose is exquisite, for example – but what it does have is a good old thriller structure that will be familiar to readers anywhere.  And what, really, is more optimistic than the thriller?  The hero or heroine, through their proactive behavior, saves either the planet or the missing/endangered family member/innocent victim at the last turn of the twisty plot.  This one is of the save the planet variety, and it couldn’t be harder to put down.  I enjoyed the novelty of the setting (this is Copenhagen rather than Stockholm, after all) and I liked the main character, Niels Bentzon, very much.

While the premise is slightly hokey, that just slots this book in with many other compulsively readable thrillers, and it bears more than a slight resemblance to Dan Brown’s The Da Vinci Code, though this is a far better and more original novel, in my opinion.  While the book starts out jumping all over the globe – from Beijing to Mumbai to Venice, the work of two policemen is highlighted.

One is a Venetian policeman, Tommaso di Barbara, who has begun linking a series of strange deaths, tied together by an odd tattoo or marking on the backs of the victims.  He has been collecting evidence and trying to present it to his uninterested superior officer, while also dealing with his ailing mother.  Tommaso has never “left the Lagoon” of Venice in his life, and the snips and details of daily Venetian life are fascinating.  The other policeman is a Copenhagen detective, Niels, who works as a hostage negotiator.  As readers we first meet him in a wonderful scene where he talks down an army vet who is holding his family hostage.  It predisposes the reader to like him, while showing, not telling, his character.  It’s very effectively done.

As the other parts of the story begin to slot together, the picture becomes clearer and tighter, eventually focusing almost totally on Niels, who, like Tommaso, has left Copenhagen but in fact has a pathological aversion to travel, complete with physical manifestations.  This keeps him far apart from his wife in South Africa, there on a year long job assignment.  His superior, like Tommaso’s, is skeptical of the cases when presented together, especially as the only common thread seems to be the fact that all of the victims were doing “good” in one way or another (so the victims are nurses, doctors, social workers, priests, monks, etc.)  Along with the weird tattoo on their backs, nothing else seems to be linking them together.

Niels’ boss, distracted by the climate summit in Copenhagen (with an appearance by Obama) sends him off on what he feels is the harmless and pointless task of warning all the “good” men in Copenhagen of possible danger, as one of the other clues points to a possible terrorist from Yemen.  As Niels makes his rounds, one of the people he encounters is a Rabbi, who shares with him the myth, discussed in the Talmud, of “God’s Righteous Men,” thirty-six good men and women on earth who hold off evil for the rest of us.  Without them, all of us would perish; each generation, they are replenished.

It’s only when Niels meets an astrophysicist who is married to one of the possible “good” men that the parts of the story begin to come together.  The husband has long left the woman, Hannah, who is mourning the death of her only son; what she’s really good at are systems of all kinds.  She sees patterns everywhere, and when she takes a look at the evidence that Niels has gotten from the Venetian policeman, the pattern of the crime begins to make sense.  Following her pattern and the suggestion of the “Thirty-Six” from the Rabbi, they figure out that the killer is up to number thirty-five.  From there on, it’s a race against the clock.

Each discovery is surprising, often original, and well presented.  The author, A.J. Kazinski, is actually two men, one of whom is a filmmaker, and indeed, the book reads a bit like an action film.  One with a bit of a brain and a spiritual twist, but still an action thriller.  Set in Copenhagen, London, or New York, a good thriller is a good thriller, and this is a good one.  I enjoyed the global tour, I loved some of the characters – Niels and Hannah especially – and I enjoyed learning some of the things the authors share as a part of their story, especially the Talmudic myth.  This is a really fun read.