Peter Robinson is one of the most intellectual of all mystery writers – and I’m including P.D. James, Ruth Rendell and the late, lamented Reginald Hill in my assessment.  One of his recent books, All the Colors of Darkness, was a take on Othello and its theme of jealousy.  This novel, while not a part of his now classic Inspector Banks series, is still a thoughtful and compelling novel, based not on Shakespeare, but on the classic film Laura. 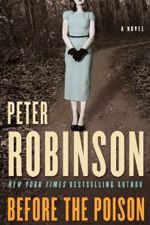 While Robinson has forsaken some of that film’s pop sensibility and sense of fun, he has retained its longing for the unattainable.  In the film, it’s a portrait of Laura that sets off the longing; in this novel, it’s both the central character’s dead wife, Laura, and the ghost of an executed woman who seems to inhabit the house this man has just bought in the depths of Yorkshire.

The main character, Chris, is a musician who composes scores for Hollywood movies; his pocketbook is therefore flush enough to buy a large and long abandoned house, Kilnsgate, a transaction made entirely through transatlantic e-mail and phone calls.  As he locates the house with some difficulty and his realtor shows him around, he finds that parts of the house seem to almost call to him, helping him to choose his workspace and his bedroom.  He feels comfortable in the house very shortly, though it’s clear he’s grieving for his beloved wife, who has recently died of cancer, and that he has in some ways fled California in hopes of escaping his grief.

As he gets into town and begins to discover more about the history of his new house, he discovers that it had belonged, during the war, to a Dr. Ernest Fox and his wife, Grace.  Grace was found guilty of Ernest’s death and hanged for the crime; the more Chris digs up about the trial, the more certain he becomes that Grace was innocent.  As a result he becomes slightly obsessed, eventually traveling to France and South Africa to find people that knew her.

This is interwoven with Chris’s growing attachment to both the house itself and a reattachment to his native Yorkshire, as well as his periodic bouts of grief and depression over his dead wife. It gives the book the tone of an elegy, a tone that is wholly appropriate, as Grace begins to seem as appealing and interesting as a long dead person can possibly be.

Eventually, Chris uncovers a younger relative of Grace’s who has her wartime journal.  The entries from the journal are entirely unexpected; it has been made plain throughout the book that Grace had been a nurse, but the terrible experiences she recounts in her war journal, her suffering as the hands of the Japanese, are shocking.  And while I enjoyed the passages, I wondered:  why has Robinson included them?

There of course is an answer.  Along with being an intellectual writer, Robinson is also a careful and precise one, and what he has done has laid the groundwork for Grace’s character, as the book is ultimately as much a character study as it is about Chris’s investigation of a long ago murder, remembered in the present only by eighty year olds.  His final denouement is less of a shock than a “that’s right” moment, one that is ultimately very satisfying for the reader.  It ends not by being sad but by being hopeful; it shows that Chris seems to be able to move on and reinvent himself.  This is a lovely and haunting book, already one of the best reads of the young 2012.