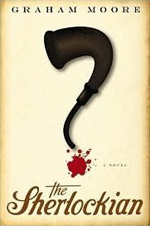 While Laurie King’s books are set firmly in the past, Moore instead alternates chapters.  One plot thread is set in the present, and focuses on Harold, the newest member of the Baker Street Irregulars.  The other thread is set in Victoria’s London, and features Sir Arthur Conan Doyle, who, sick to death of Holmes, is instead trying to write “realistic” fiction after killing Holmes off.

As Doyle makes his way around the streets of London he finds himself both reviled for killing off Holmes, and revered for creating him in the first place.  Anywhere he goes it’s clear he’s one of the first celebrities, as ordinary folks talk to him about Holmes as though he were a real person.  Much to Doyle’s disgust.

The brilliance of Graham Moore’s conceit is not totally clear until towards the end of the novel, but the set up of the story has the virtue of being both original and entertaining, not so caught up in it’s own cleverness that the author forgot to tell a good story.  In this case, two stories.

The story involving Harold and the Baker Street Irregulars focuses on the annual gathering at the Algonquin Hotel in New York of the Irregulars, as they await the unveiling of the lost diary by one of the more respected members of the society.  As they wait and wait for this man to show up and his “reveal” to begin, he of course doesn’t show, and he’s discovered dead in his hotel room.

Harold, who wears a deerstalker cap as a matter of course, is one of the folks who goes up to look for the missing man.  When he and a reporter named Sarah and another member of the Irregulars find the body, Harold snaps into Holmes persona, searching the room for clues before the police arrive.  Sure enough, he finds one, a very Holmes-ian one.  This clue sets Harold on the path of finding both the man’s killer and the missing diary (for of course it’s not in the hotel room), a task commissioned by none other than Sebastian Conan Doyle, grandson of the great man.  Before you know it, Harold is off to London with Sarah.

Meanwhile Holmes and his pal Bram Stoker, who toils as a theater manager, are on the lookout for the person who slipped a bomb through Doyle’s letter box, almost blowing up his family.  This makes Doyle so angry he goes to Scotland Yard; and when he finds little activity there, he sets out himself to unravel the crime, one that leads him not just to a bomber, but toward a series of murders of young women.

As both Doyle and Harold work as amateur detectives, in everything they apply Holmes’s methods of logic, reason and deduction to arrive at a solution.  And while Doyle continues to be disgusted by the stranglehold of Sherlock Holmes, he is slowly captivated by actual detection, something the real Sir Arthur Conan Doyle also did – he “helped” Scotland Yard out on a few cases.  As a reader, you can also sense that Doyle is coming around to bringing Holmes back from the dead.

Harold’s story, which is really a chase for a Macguffin in the form of Doyle’s diary, nevertheless takes him to all the holy grail locations of any Doyle/Holmes fan, ending at Reichenbach Falls.  While a rough knowledge of the books and the character of Holmes add to your enjoyment of the book, it’s not really necessary, as this is a wonderfully told story.  And you’ll discover, just as Sir Arthur Conan Doyle himself did, that Sherlock Holmes will never die.  In a rapidly changing world, this is a real comfort, as is this wonderful book.