There are so many serial killer novels, so little time.  There are so many that I gave up reading them long ago, and yet – when I come across one that seems to have a different twist, I can’t help but pick it up.  I’ve read a couple others in the past few years that offered a twist – A Curtain Falls, by Stefanie Pintoff, which used a historical perspective; and Children of the Street by Kwei Quartey, which seemed to be (and was) a commentary on the street children of Accra, Ghana, but turned out also to be a twisty serial killer story.  R.J. Ellory’s joins that company, though his book is the most traditional of the three. 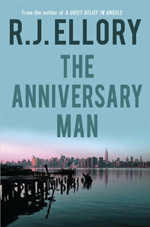 Ellory’s book most resembles an extended Law and Order episode, though his “Lenny” stand in, Ray Irving, lives a more solitary life, and seems to work without a partner.  His solitary life is a thread that runs through the book, which on the surface is a precise and careful police procedural.  The twist comes from two sources:  one is the prose, which is far more poetic than typical thriller novel prose, and the other is the entire premise of the novel.

The book opens with a terrible recounting of crimes attributed to the “Hammer of God” killer, someone who kills courting couples.  The only victim to escape, 17-year-old John Costello, wakes up to the nightmare discovery that his girlfriend has been murdered.  Though the killer is apprehended and dies in prison, John Costello must learn how to deal with life as a survivor.

Fast forward from 1984 to 2006, and John Costello is a newspaper researcher, one with an encyclopedic knowledge of serial killers.  He works with a reporter who gets the first hint that a series of killings being investigated by different precincts are tied together; the man who puts the case together, Ray Irving, has figured out that they’re related and eventually heads up the entire investigation, which proves to be one of frustration.  The only thing coming his way in the “clue” department are John Costello’s messages indicating that each killing is a replica of an earlier and famous serial killer (Zodiac, Shawcross, Gacy, etc.).

The careful way this story is told almost dilutes its horror, but the last killing is so terrible and sad that the story telling can’t mask it, even though Ellory gives it a try.  As the solitary lives of both Costello and Irving – who nevertheless seems to be getting closer to the reporter, Karen – are illuminated as different ways of dealing with trauma (in Irving’s case, the grief of losing a life partner).

To me what makes any mystery worth a read are the characters.  The characters in this novel make reading it worthwhile, as does the original story telling method.  If you’re queasy even thinking about serial killers don’t pick it up, but if not, this surprisingly thoughtful book is well worth a look.