G.M. Malliet is obviously a devotee of the golden age of mystery – Agatha Christie, Ngaio Marsh, Margery Allingham – and she takes the old formula made dear to readers and applies it to the 21st century.  This novel especially resembles Ngaio Marsh’s Overture to Death, where a particularly unpleasant village specimen is murdered at the piano warming up for an amateur theatrical.  The vicar in Marsh’s novel is described as looking like a “Roman Coin,” while in Malliet’s, the vicar instead resembles the contemporary and dishy Hugh Grant. 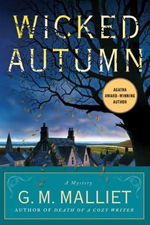 The vicar is at the heart of this novel, and to make things even more up to date, he has a mysterious past in the MI6 (or is it the MI5?) that comes back to haunt him in flashbacks.  But make no mistake, this is an unabashed village cozy, where the most unpleasant woman in Nether Monkslip, Wanda Batton-Smythe, is murdered at the village Harvest festival, or “Fayre” as the novel would have it.

While Malliet’s tongue is often firmly in cheek, with the descriptions of the citizenry frequently reaching a witty pinnacle that will have the reader chuckling throughout, she also hits on some real depth of emotion.  This saves her village cozy re-creation from being one of cardboard.   The devastation of Wanda’s widower is especially touching, but there are also some penetrating looks at the way the vicar came to his late in life calling, as well as an examination of various parent-child relationships.

None of that stuff is heavy handed, just lightly touched on, but it moors the book and prevents it from being hopelessly twee.  As the tricky mystery unfolds – Wanda has been felled by a fatal allergy to peanuts – village relationships are also explored.  Because of the vicar’s MI6 background the local constabulary is more than willing to turn to him, and let him do some gentle investigating on his own.

While it’s almost jarring that the citizens of Nether Monkslip have cell phones (or mobiles), it’s also made clear that the many participants in the “Fayre” are local business people, a class of folks that would have had little standing in Christie’s day.  So while the world has turned on it’s axis a bit, it’s still a comfort to snuggle up with a village cozy, especially one as witty as this one.  It’s a little jewel of a first novel.