Julie Hyzy unusually combines the skills of a cozy writer with the skills of an accomplished writer of slam bang action.  The combination is irresistible.  Her main character, executive White House Chef Olivia “Ollie” Parras, has been assigned the job of working closely with her nemesis, Peter Sergeant, as they plan an off site birthday party for the Secretary of State.  Uneasy at working together – Sergeant has no use for Ollie’s tendency to get involved with suspicious bodies, or her tendency to think a bit outside the box – they head off to look at a final venue for the party.  Unfortunately there are two bodies there ahead of them, and Ollie and sergeant are put under 24 hour guard, as both of the bodies were connected to the White House. 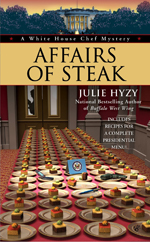 As Ollie chafes both at working closely with Sergeant and with a new and inexperienced head usher, who doesn’t have the diplomatic skills of his predecessor, she’s at the same time assigned the temporary task of running the entire birthday party for the Secretary of State, not just the food.  While her kitchen assistants, Bucky and Cyan, are always competent and helpful, Ollie must also contend with the diva like behavior of the First Lady’s personal Chef, Virgil, who swans in and out as he pleases and doesn’t work well with others.

Ollie is also trying to figure out the parameters of her burgeoning relationship with Secret Service agent Gav, and the whole thing has her teetering on the brink.  She’s a very strong and centered person, however, and these books are very good primers at how to get along in the workplace, something everyone can relate to, whether they work in the White House or not.  The machinations of the White House and how their events are managed never ceases to fascinate, and as Hyzy can change out Ollie’s boss every four years or so, she’s guaranteed a pretty long run with a series that can constantly be rejuvenated.

While the cooking bits aren’t as front and center as they are in say, Diane Mott Davidson’s books, Hyzy includes recipes at the end of the book.  The cooking is more of a context for Ollie, one that never overwhelms the story.  Hyzy is also more than adept at wrapping up her stories in an exciting, action packed way – not too much action and tension, but just enough. All the threads are well handled, and one of the strongest parts of this particular book is the changing relationship between Ollie and her nemesis.  It’s very believable and actually touching.  These are wonderful books, enjoyable to read, hard to put down, and they make you really look forward to the next one in the series.  What better compliment could there be?